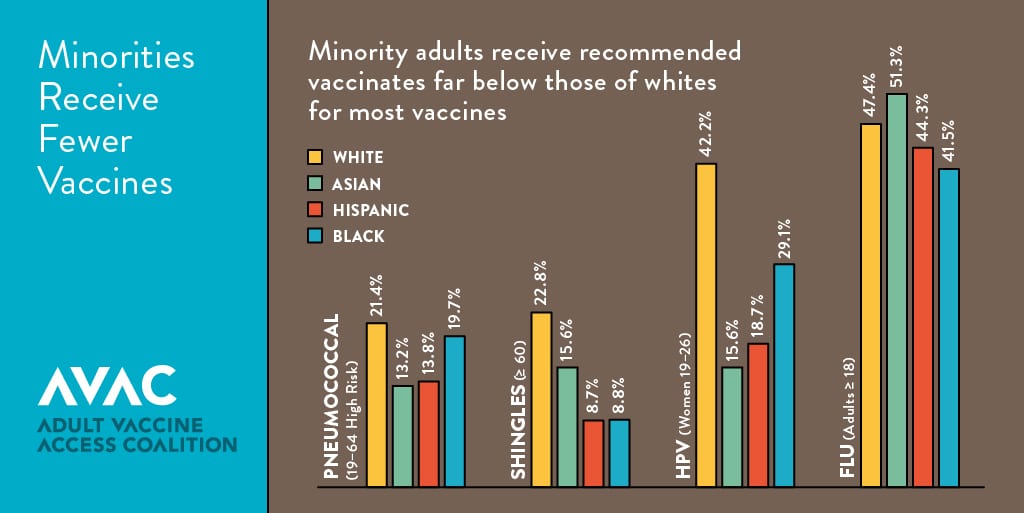 April 2016 is National Minority Health Month and this week marks World Immunization Week.  This year’s theme for Minority Health month is “Accelerating Health Equity for the Nation.”  Our nation has made important progress in recent years toward increasing immunization rates among all Americans. This is particularly true for children: disparities in childhood vaccination coverage across socio-demographic groups have essentially been eliminated over the past decade. But when it comes to adult immunization, we have not been nearly as successful.

The truth is vaccines remain out of reach for far too many Americans, especially among non-white populations. For example, 28 percent of Americans over age 60 have been vaccinated for shingles, including 32 percent of whites. But these figures are far lower for minorities: only 16.5 percent of Asians/Pacific Islanders, 14.6 percent of Hispanics, and 11.6 percent of Blacks.  Moreover, compared to non-Hispanic whites, African Americans age 65 and over are 20 percent less likely to receive a flu vaccine and Asians/Pacific Islanders are 20 percent less likely to receive a pneumonia vaccine.

To put that figure in perspective: $26.5 billion is nearly four times the approximate annual budget of the entire CDC.

The Adult Vaccine Access Coalition (AVAC), a diverse coalition of health care providers, vaccine manufacturers, pharmacies, and public health, patient, and consumer groups, believes all Americans—no matter their age, race, location or socioeconomic status—should have access to life-saving vaccines. Raising immunization rates overall is important but it’s also insufficient; we have to make sure that higher rates extend to all populations, not just some and not only for those who can afford to pay.